The Purezone is a locally produced ozone generator developed by a well respected scientist in conjunction with the .

Ozone (O3) is simply activated oxygen, often referred to as natures ingredient used to neutralize unwanted species in the air that we breath or the water that we drink.

Being a gas, ozone reaches where conventional cleaners/ disinfectants cannot. Ozone destroys pollutants up to 3200 times faster than traditional oxidants like chlorine with no residual harmful by- products since it, after reaction, reverts to oxygen, carbon dioxide and water which are all natural and environmentally friendly products.

How is ozone produced?

The process involves stripping electrons from the oxygen atoms braking the O2 molecule before Coulomb collisions occur. The nett result is that energy employed to make ozone’s efficiently consumed and less heat (that is wasted energy) is generated.

O2 (Oxygen) is converted to O3(Ozone)

As atoms split off to oxidize a pollutant- leaving behind o2, the air that we breath.

The air we breathe is filled with many pathogens and unhealthy bacteria cells.

The most common are:

Bad Smell bacteria … and  many more 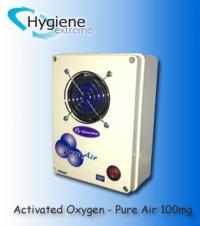 Enquire about this product

Send link to a friend